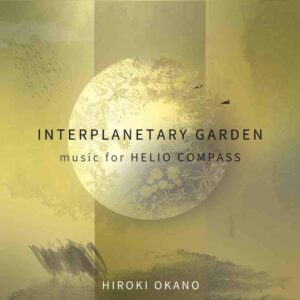 Interplanetary Garden: Music For Helio Compass is a 52-minute grand musical score by Hiroki Okano, Japan’s leading ambient music composer. The grand musical score that represents a year-long revolution of the planet Earth, features an assortment of sounds that perfectly coincides with this year’s astronomical events. These include 24 seasonal divisions, moon phases as well other major seasonal points on the calendar.

ncidentally, Hiroki was invited to the grand festival of Arunachala Hill, a holy place in India, and made a pilgrimage there in the midst of production. He visited several venerable temples to dedicate his musical performances.  They included the Navagraha temples, dubbed “the nine planet temples”, that enshrine nine deities respectively, each symbolizing a major celestial body in the solar system. During a festive highlight, when sacred sticks were burnt and people offered prayers, the entire Arunachala Hill was plunged into darkness due to a power outage.  After the bustle had vanished and complete silence embraced the town, Hiroki miraculously captured the sound of thunder. That sound impressively heralds the season in the composition.

Varied ambient sounds, including the resonance of life on Earth, sounds of flowing water and whispering wind, harmonize with the musical passages. Take your time to unwind, to simply listen to the music and sense the vibrations of Earth, visualizing the solar system, just as if you were sitting on the floor in front of a Zen garden.